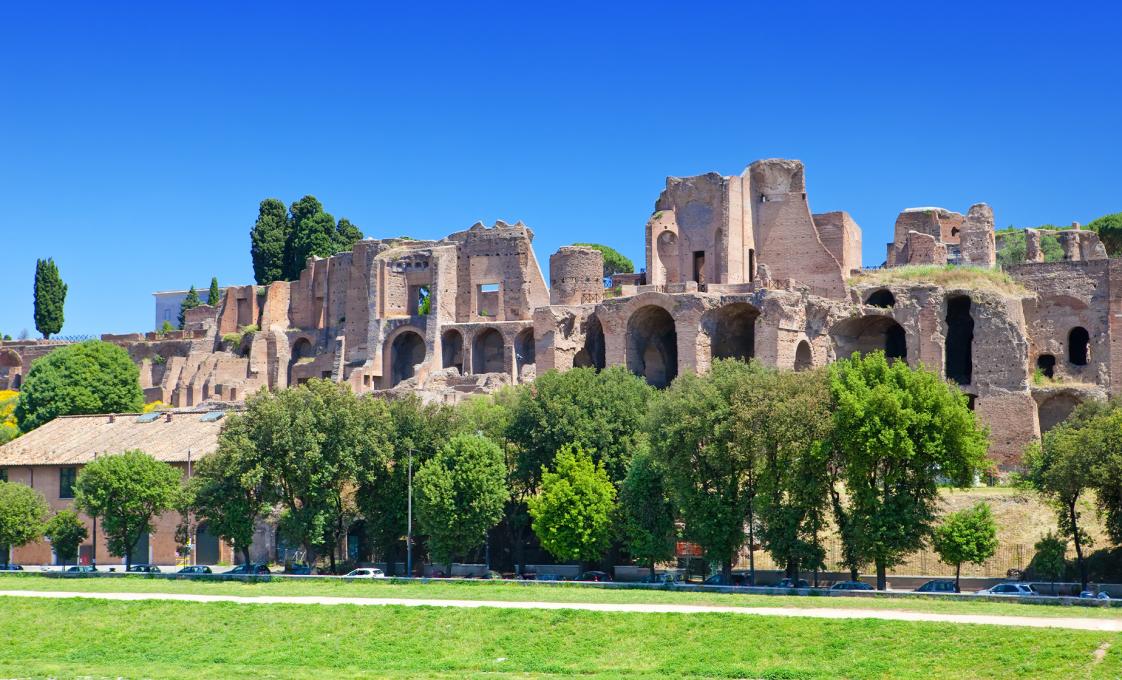 See the sites of Classical and Imperial Rome on this tour that brings you to the greatest spots in this ancient city. During your tour, enjoy a traditional Italian lunch to immerse yourself in the city's culture.

Go Inside the Colosseum and Learn About Rome's History

Travel by bus and by foot to the must-see attractions of Rome on this tour that spans the ages of the city. Tour the Colosseum and take a step inside history. See the famous piazzas of Rome, including Piazza Navona, Piazza della Repubblica, Piazza Venezia, and Piazza Del Campidoglio. Visit the Trevi Fountain, the Pantheon, Aventine Hill, and Circus Maximus. You won't have missed an ounce of Rome on this tour that takes you on a walk through time.

Your guided Rome day tour will overwhelm you with history, culture, art, and beauty. In the first half of this tour, you will visit the Trevi Fountain, built at the site of a former aqueduct and completed in 1762. Featuring ornate Baroque design, this fountain is one of the most famous in the world. Next, your tour will lead you inside the Pantheon. The Pantheon was first erected as a temple to the Roman gods with its giant Corinthian columns and later converted into a Roman Catholic Church. You will pass by Palazzo Madama and Piazza Navona on your way to St. Peter's Square. You will be amazed by Piazza Navona with its gigantic Fountain of the Nayads, featuring four naiads representing rivers, lakes, oceans, and underground waters. You will also be able to enjoy a view of St. Peter's Basilica, with its intricate architecture and impressive frescoes, before lunch.

Lunch (drinks not included) will be provided during the time between both legs of the tour. Enjoy your included lunch and some down time so you'll be refreshed for even more sightseeing. After lunch, you will be provided with views of Piazza Del Campidoglio, designed by Michelangelo, and of the Roman Forum. Next, travel to Circus Maximus and the Aventino Hill. From there, take a short walk to reach the symbol of the eternal city. Step inside the Colosseum and experience the world of ancient Rome; be guided through the amazing structure where 50,000 citizens of Rome once sat for games, executions, mock battles, and theatre events.

Spend a day touring the best of Rome on this comprehensive guided excursion to the monuments, piazzas, fountains, churches, and ruins that make this Italian city a travel destination. Enjoy a guided tour of Rome with lunch and know that you'll have seen everything there is to see in the city. Don't forget your camera; this tour of Rome is full of photo opportunities.

Please Note: This tour does not provide custom hotel drop-off. Full details will be outlined in your electronic ticket. This tour takes place in Rome. Guests on ships docking in Civitavecchia will need to make their own way to Rome from Civitavecchia (approximately 50 miles away) at their own expense. There is train service from nearby train stations, and the average trip takes approximately 90 minutes each way. Your cruise ship may offer a shuttle to a nearby station.

Price ID: 7620683
Must be Purchased by: May 3, 2024
Tour Type
Group
Group Size
Standard
Activity Type(s)
Cultural
Tour Duration
9 Hours
Activity Level
Moderate
Tour Leaves From
A taxi or shuttle (not included) is required to reach your departure location
Food/Beverage Provided
Lunch is included.
Special Instructions
As you will be visiting a religious site, shoulders and knees must be covered. Sensible, rubber-soled walking shoes, sunglasses, and sunscreen is recommended.
Restrictions
This tour is not wheelchair accessible. For security reasons, backpacks, camping bags, luggage, and other large bags are strictly prohibited in the Colosseum.
Contact Us
Terms & Disclaimers

Prices, additional fees, itineraries, and availability of this product are subject to change at any time. Please contact us for more information.
If you are interested in an offer, please click on Contact Us . This will open a "Trip Request" that will allow you to send your request to us. We will be able to confirm availability and make further recommendations.
This tour is not wheelchair accessible. For security reasons, backpacks, camping bags, luggage, and other large bags are strictly prohibited in the Colosseum.