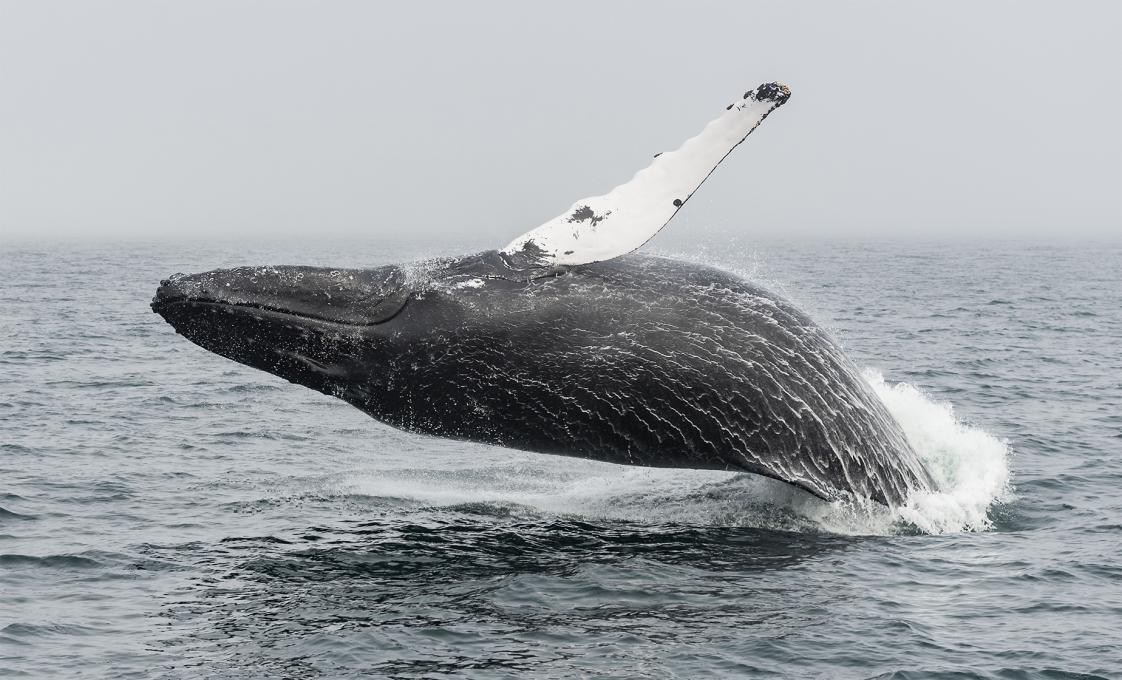 High-speed catamarans are the fastest, most comfortable way to view the ocean's most fascinating and magnificent creatures. You'll have a good chance to view several different species of large whales, including humpbacks, finbacks, minkes, pilot whales, and the critically endangered right whales. Learn about these amazing creatures from New England Aquarium naturalists on board.

Whales cruise off the New England coast from April to November, gathering at the major feeding grounds off the Massachusetts coast. These huge mammals reach more than 65 feet in length. Even a fleeting glimpse is a thrilling and very memorable experience. Among the species that can be seen are finback, humpback, minke and right whales. These Northern Hemisphere humpbacks reach an average weight of about 37 tons and are among the most endangered. It is estimated that only eight percent of their original population remains.

The high-speed catamarans used for this tour are the fastest, most comfortable way to view the ocean's most fascinating and magnificent creatures. Getting you to and from the whales in less time means you get to spend more time actually watching them. The awe-inspiring sight of these majestic, giant creatures breaching and spouting nearby is more than exciting. The World Wildlife Fund named Massachusetts as one of the world's top ten whale-watching spots.

Set sail for the whale watch experience of a lifetime. Your destination: Stellwagen Bank Marine Sanctuary, a rich feeding ground for whales, dolphins, sea birds and other marine creatures. You'll have a good chance to view several different species of large whales, including humpbacks, finbacks, minkes, pilot whales, and the critically endangered right whales. On this tour, you may also see white sided dolphins, which are found only in the North Atlantic. You'll learn about these amazing creatures from New England Aquarium naturalists, who are always on board to share knowledge, answer your questions, and explain the mind-blowing behaviors of these truly magnificent mammals.

Professional researchers from the Whale Center of New England, the region's foremost authority on whale populations, are onboard for every trip to provide narration. Want to feel what it's like to join them? Then this is the tour for you!

Price ID: 7620897
Must be Purchased by: May 3, 2024
Tour Type
Group
Group Size
Standard
Activity Type(s)
Cultural, Scenic, Water
Tour Duration
4 Hours
Activity Level
Easy
Tour Leaves From
An approximately 5 to 10 minute taxi (not included, approximately $10 US each way) is required to reach your departure location.
Food/Beverage Provided
Not Included
Special Instructions
We recommend wearing comfortable clothing and sensible rubber soled shoes for walking on the boat. Guests should bring a light sweater or jacket, sunglasses, a hat, and sunscreen.
Restrictions
Guests must be able to step on and off the boat. There are steps required to access the upper deck.
Contact Us
Terms & Disclaimers

Prices, additional fees, itineraries, and availability of this product are subject to change at any time. Please contact us for more information.
If you are interested in an offer, please click on Contact Us . This will open a "Trip Request" that will allow you to send your request to us. We will be able to confirm availability and make further recommendations.
Guests must be able to step on and off the boat. There are steps required to access the upper deck.